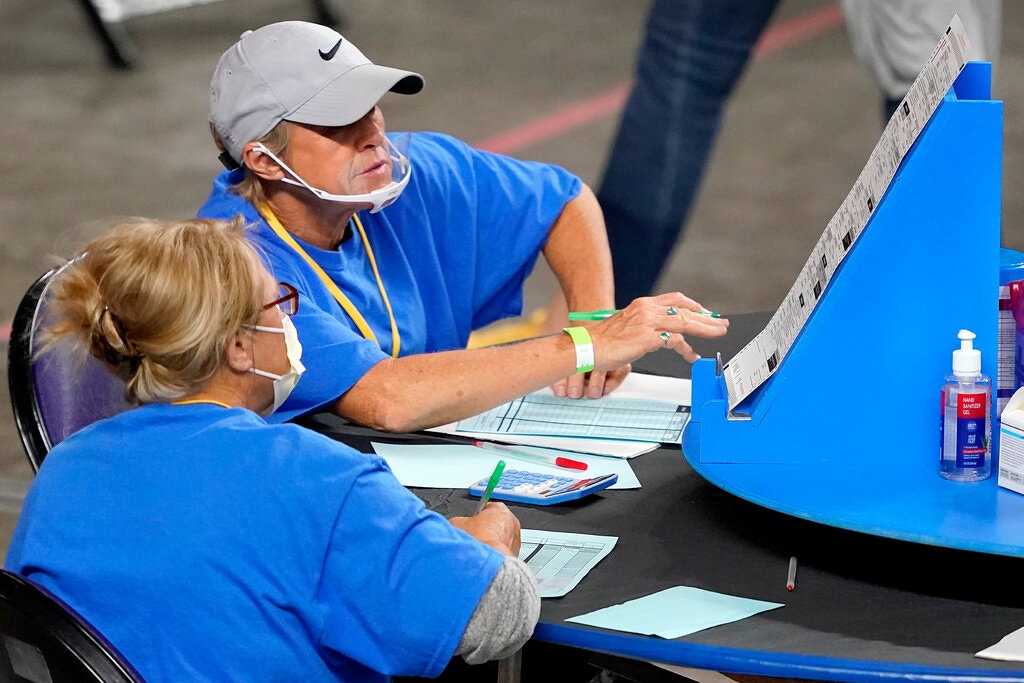 An analysis found that a hand recount of votes by Republican investigators missed thousands of ballots, and possibly many more.

By Michael Wines and Nick CorasanitiOct. 1, 2021

The circuslike review of the 2020 vote commissioned by Arizona Republicans took another wild turn on Friday when veteran election experts charged that the very foundation of its findings — the results of a hand count of 2.1 million ballots — was based on numbers so unreliable that they appear to be guesswork rather than tabulations.

The organizers of the review “made up the numbers,” the headline of the experts’ report reads.

The experts, a data analyst for the Arizona Republican Party and two retired executives of an election consulting firm in Boston, said in their report that workers for the investigators failed to count thousands of ballots in a pallet of 40 ballot-filled boxes delivered to them in the spring.

But given the large undercount found in just a sliver of the 2.1 million ballots, it would effectively be impossible for the Republican investigators to arrive at such precise numbers, the experts said.

Rod Thomson, a spokesman for Cyber Ninjas, the company hired to conduct the inquiry in Arizona, rejected the experts’ claim. “We stand by our methodology and complete final report,” he said.

Investigators went through more than 1,600 ballot-filled boxes this summer to conduct their hand recount of the election in Maricopa County, the most populous county in the state. Both they and the Republican-controlled State Senate, which ordered the election inquiry, have refused to disclose the details of that hand count.

But a worksheet containing the results of the hand count of 40 of those boxes was included in a final report on the election inquiry released a week ago by Cyber Ninjas.

The three election experts said the hand count could have missed thousands or even hundreds of thousands of ballots if all 1,600 boxes of ballots were similarly undercounted. Their findings were earlier reported in The Arizona Republic.

For months, the Cyber Ninjas effort had been the lodestar of the conservative movement, the foundational investigation that would uncover a litany of abuses and verify countless conspiracies, proving a stolen election. But the review was criticized from the start for unprofessional and unorthodox methods and partisan influence.

Now, the experts’ findings on the vote review compound withering analyses debunking a wide range of questions raised in the review about the counting of votes and conduct of the election. Nonetheless, the review has been embraced by Mr. Trump and his followers even as its findings have been overwhelmingly refuted.

Noting that the leaders of the Arizona review had “zero experience in election audits,” the experts concluded, “We believe the Ninjas’ announcement that they had confirmed, to a high degree of accuracy, the election results” of one of the largest U.S. counties “is laughable.”

Laughable or not, none of it changed the fact that Mr. Biden won the state by about 10,500 votes and Maricopa County by roughly 45,000 in several official tallies of the vote.

Katie Hobbs, the Democratic secretary of state in Arizona, said the report’s findings vindicated criticisms about the Cyber Ninjas process.

“It was clear from the start that the Cyber Ninjas were just making it up as they went,” Ms. Hobbs said in a statement. “I’ve been saying all along that no one should trust any ‘results’ they produce, so it’s no surprise their findings are being called into question. What can be trusted are actual election officials and experts, along with the official canvass of results.”

The inquiry into the election has been repeatedly condemned as a sham by election experts and denounced by the Republican-dominated Maricopa County Board of Supervisors, which oversaw the 2020 vote.

Critics note that the chief executive of Cyber Ninjas had spread false allegations that Arizona voting machines were rigged to ensure Mr. Trump’s defeat. The summer-long investigation was financed almost entirely by nearly $7 million in donations from Trump supporters.

The experts based their conclusion on a worksheet containing a slice of the hand-count results that the Republican investigators published in the report on their inquiry. The worksheet shows that investigators counted 32,674 ballots in 40 of the 1,634 boxes of ballots they were reviewing.

But official records show — and the investigators’ own machine count of the 2.1 million ballots effectively confirmed — that those 40 boxes actually contained 48,371 ballots, or 15,692 more than were counted.

The worksheet indicated that nine of the boxes had not been counted at all. But even if those boxes were excluded from the tally, the count of the remaining boxes fell 4,852 ballots short of the correct total, the experts said.

The charge of a ballot undercount comes atop the debunking by experts and Maricopa officials of virtually all of 22 implications of voting irregularities, involving more than 50,000 voters, in the Cyber Ninjas report.

Among them: A claim that 23,434 mail-in ballots may have come from addresses that voters no longer occupied was based on research using a commercial address database that itself did not include 86,391 of the county’s registered voters and, like most lists, relied on sources that are often inaccurate. It also ignored the fact that voters may legally cast ballots and then move. And moving is common: More than 280,000 Maricopa County households moved in 2019 alone.

Another claim that thousands of voters returned more ballots than they received misconstrued a data file that makes a new entry every time a damaged or incomplete ballot is corrected.

Yet another claim that precincts counted 836 more votes than were recorded ignored the fact that the records of some 3,600 voters, such as abused spouses and police officers, are not made public for security reasons. And an insinuation that 5,295 Maricopa County voters may have double-voted because residents of other counties had the same names and birth years was spot-checked by county officials and found baseless; the outsiders were in fact other people.

With similar reviews now set for Pennsylvania, Wisconsin and Texas, it is increasingly clear that Arizona’s partisan review succeeded while it failed — by amplifying baseless talking points while failing in any factual way to back up Mr. Trump’s claims of a rigged election.

The Arizona-style reviews in other states seem likely to follow the same script with the blessing of the Republican political leaders who are promoting them, said Nate Persily, a Stanford University law professor, elections expert and scholar of democracy.

“For those who are pushing the fraud narrative, the actual truth is beside the point,” he said. “The idea that the election was stolen is becoming a tribe-defining belief. It’s not about proving something at this point. It’s about showing fealty to a particular description of reality.”

Indeed, in the wake of the initial Cyber Ninjas report, Republicans in the Pennsylvania Senate only furthered their resolve to press ahead with a review of the election, one that includes a request for drivers’ license numbers and partial Social Security numbers of all seven million Pennsylvania voters.

“The historic audit in Maricopa County is complete and significant findings have been brought to light,” State Senator Doug Mastriano, a Republican and leading proponent of the election review, said in a statement last week. “If these types of issues were uncovered in Maricopa County, imagine what could be brought to light from a full forensic audit in other counties around the U.S. who processed mass amounts of mail-in ballots.”

On Friday, Robin Vos, the speaker of the Wisconsin Assembly, signed multiple subpoenas issued to the head of the elections commission in Milwaukee, the biggest city in the state and home to the largest concentration of Democratic voters, with a substantive request for documents, including communication between the city and state elections boards.

Mr. Vos, in an interview this week, reiterated his commitment to investigating the 2020 election, with a presumption that there were mistakes in the administration.

“I think we kind of have to accept that certain things were done wrongly — figure out how to correct them, or else we’re never going to have public confidence,” Mr. Vos said.

Michael Wines writes about voting and other election-related issues. Since joining The Times in 1988, he has covered the Justice Department, the White House, Congress, Russia, southern Africa, China and various other topics.  @miwine