From The New York Times:

There’s nothing unusual about exaggeration in politics. But when it comes to the debate over voting rights, something more than exaggeration is going on.

There’s a real — and bipartisan — misunderstanding about whether making it easier or harder to vote, especially by mail, has a significant effect on turnout or electoral outcomes. The evidence suggests it does not.

The fight over the new Georgia election law is only the latest example. That law, passed last week, has been condemned by Democrats as voter suppression, or even as tantamount to Jim Crow.

Democrats are understandably concerned about a provision that empowers the Republican-controlled State Legislature to play a larger role in election administration. That provision has uncertain but potentially substantial effects, depending on what the Legislature might do in the future. And it’s possible the law is intended to do exactly what progressives fear: reshape the electorate to the advantage of Republicans, soon after an electoral defeat, by making it harder to vote.

And yet the law’s voting provisions are unlikely to significantly affect turnout or Democratic chances. It could plausibly even increase turnout. In the final account, it will probably be hard to say whether it had any effect on turnout at all.

Georgia Republicans have been working hard to get voters off the rolls, and indeed, they reduced their numbers by 7% in last year’s purge. The bad news for those Republicans, however, is that nearly as fast as they throw voters off the lists, new ones—in large part younger and more racially diverse—are registering.

There was a 3% increase in registered voters in the last year, and new voter registrations outpaced the purges of 2016-2018, with 902,000 new voters replacing the 797,000 removed during that time. Another 98,000 were purged late last year, in what was a limited win by Stacey Abrams’ group Fair Fight Georgia: The original plan had been to delete more than 300,000.

The share of voters aged 18-34 has increased by 68% over the last three years, to comprise almost a third of the state voters. The share of white voters has decreased since 2016 as well, though whites are still a 59% majority of those who identify their race when they register. In 2016, that share was 62%. The state began automatic registrations at driver’s license offices in September 2016, which account for about 1.1 million of the new registrations. But it’s not just that, as voter registration drives have been activated ahead of the 2020 election, when Georgia will have two U.S. Senate seats and three open House seats as well as the president on the ballot.

“We’re seeing an aging cohort that’s majority white, and then you’ll see an increasing younger age cohort [that’s] majority nonwhite,” Mike Carnathan, manager of research and analysis for the Atlanta Regional Commission, told The Atlanta Journal-Constitution. “That’s exactly what the future of metro Atlanta holds when it comes to the composition of the population.”

Read the rest of the story at the Daily Kos website.

ATLANTA — A federal judge, this week, ruled against Gov. Brian Kemp in a lawsuit filed against him in 2018, while he was still Secretary of State.

The federal lawsuit was initiated by freelance journalist Greg Palast along with Helen Butler, executive director of Georgia Coalition for the People’s Agenda.

According to the suit, Kemp, in his role as secretary of state, was accused of using a racially-biased methodology for removing as many as 700,000 legitimate voters from the state’s voter rolls during a period between 2016 and 2018.

Read the rest of this story on 11Alive’s website. 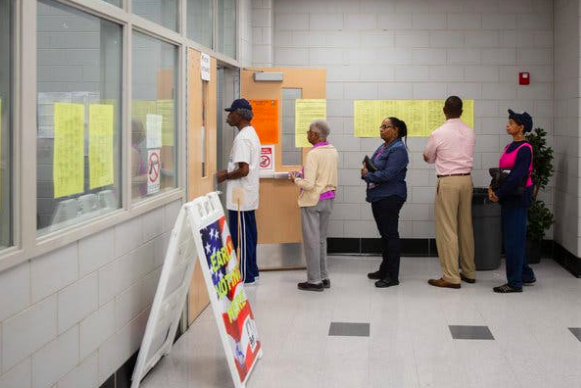 Voting rights advocates described the removals as troubling, saying it was just the beginning of efforts to suppress the vote in battleground states.

By Nicholas Casey
Oct. 30, 2019
A coming purge of Georgia’s voter rolls has raised alarms among advocacy groups in the state and nationwide, many of whom see the issue of who gets to cast a ballot re-emerging with next year’s election, particularly in battleground states.

This week, Georgia state officials said they would be removing about 300,000 names from their lists of eligible voters, a number that amounts to almost 4 percent of those registered to vote. The state said the move is a normal part of updating records after voters have moved away or stopped casting ballots.