As the November General Election nears the question of wrongful voter purges maintains urgency. Looking at eight battleground states, the Voter Purge Project finds that states are still quick to purge voters, the number of new undeclared voters is growing at a faster rate than new registrations with either party, growth in the number of young voters lags behind the growth in the 18-24 y.o. population, and known voter suppression efforts appear to be effective in some states.

Since its convening, the Voter Purge Project has been analyzing changes in voter lists from nearly 30 states with an increasing understanding of how voters get removed from state voter rolls. “Our unique knowledge of the way voter files are kept and maintained by states allows a level of precision in comparing change in voter rolls over time,” says Wade Rathke. “This analysis helped identify over 60,000 newly registered ‘inactive’ voters in battleground states that are in jeopardy of being unfairly removed from the rolls.”

Given the availability of data from different states, the new VPP report highlights trends in the types of voters experiencing unnecessary disenfranchisement and the continued need for state election authorities to address issues with their voter rolls.

The Voter Purge Project protects eligible voters against disenfranchisement by monitoring, reporting on, and organizing against wrongful voter purging. 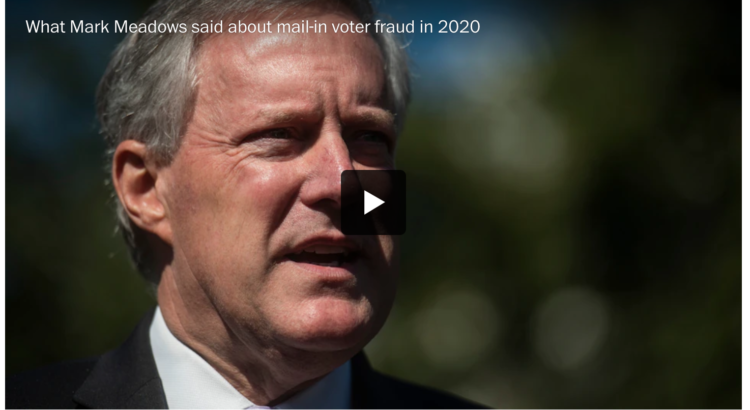 What Mark Meadows said about mail-in voter fraud in 2020

“I don’t want my vote or anyone else’s to be disenfranchised. … Do you realize how inaccurate the voter rolls are, with people just moving around? … Anytime you move, you’ll change your driver’s license, but you don’t call up and say, ‘Hey, by the way, I’m re-registering.’”

After Donald Trump lost the presidential election, falsely claiming election fraud, Meadows became senior partner at the Conservative Partnership Institute (CPI), which promotes “election integrity” efforts. The organization’s “citizen’s guide” urges activists to determine that the registrations of their neighbors are legal by checking on “whether voters have moved, or if the registrations are PO Boxes, commercial addresses or vacant lots” and then “obtaining evidence: photos of commercial buildings? Vacant lots?” and “securing affidavits from current residents that a registered voter has moved.”Advertisement

Voter-list maintenance is one of the dividing lines in American politics. Republicans argue that if voter-registration records are not regularly purged and updated, election fraud can take place. Democrats push back that too many voter-list purges are conducted haphazardly, removing eligible voters who don’t learn they are no longer listed until they show up to vote.

Now it turns out that until last week, Meadows was simultaneously registered to vote in three different states — North Carolina, Virginia and South Carolina — according to state records obtained by The Fact Checker.

The overlap lasted about three weeks, and it might have continued if revelations about Meadows’s voting record had not attracted scrutiny in North Carolina. Meadows is still registered in Virginia and South Carolina.Advertisement

This is the latest in a series of revelations about election-related behavior by Meadows that appear to contradict his and his party’s rhetoric on election integrity.

Meadows, in fact, was the keynote speaker at a CPI Election Integrity Summit in Atlanta on Feb. 19. “What you’re doing is investing in the future of our country and making sure only legal votes count,” Meadows told attendees. He said he had just gotten off the phone with Trump, who he said had told him: “We cannot give up on election integrity.”

About three weeks after that speech, the New Yorker reported that Meadows had registered to vote at a home where he did not reside. Meadows and his wife, Debra, had submitted voter registration forms that listed as their residential address a 14-by-62-foot mobile home in Macon County, N.C., with a rusted metal roof that sold for $105,000 in 2021, even though they did not actually own it or live there. He then voted in the 2020 election via absentee ballot.Advertisement

North Carolina officials announced last month that, as a result, Mark Meadows is under investigation for potential voter fraud. On April 11, his voter registration was removed by Macon County officials, the North Carolina State Board of Elections said last week.

The state cited the fact that Meadows had voted in Virginia during the 2021 gubernatorial election that elected a Republican, Glenn Youngkin. Meadows and his wife had registered to vote in the state in September, his and her voter registration applications show, even though they were still registered in North Carolina.

About two weeks after publication of the New Yorker article, Meadows registered to vote in South Carolina, state election records show. In July 2021, Meadows had purchased a three-story waterfront home of more than 6,000 square feet in South Carolina for nearly $1.6 million. But until this year, he also owned a townhouse in Alexandria that he had purchased in 2017.Advertisement

It is not unusual for some overlap in voter rolls as people move across state lines, and many people do not bother to terminate their voting registration when they move. In contrast to Meadows, however, former secretary of state Mike Pompeo canceled his voter registration in Kansas just a few months after selling his home in Wichita and moving to McLean when he became CIA director.

South Carolina and Virginia are members of the Electronic Registration Information Center, a nonprofit that provides member states with reports on voters. If Meadows had listed his Virginia voter registration while registering in South Carolina, the state would have notified Virginia. Angie Maniglia Turner, Alexandria’s general registrar and director of elections, said Thursday that there has been no change in the voter registration status in Virginia of either Mark or Debra Meadows.

Ben Williamson, a spokesman for Mark Meadows, declined to comment.Advertisement

At the time Meadows registered to vote in North Carolina in 2020, using the mobile home address, he no longer owned a home in the state. In March 2020, Meadows sold, for $370,000, a house in Sapphire, N.C., that his mother had lived in. Meadows’s mother, Mary Gail Garwood, had lived at and voted from the Sapphire property in 2012, 2014 and 2016. She then registered to vote in Georgia on Sept. 12, 2018. Meadows listed the property for sale the next day. Garwood did not respond to a message left for her at the retirement community where she now resides.

Meadows, as of 2018, had been registered to vote from the Sapphire property.

Gerry Cohen, a North Carolina election official, said that under state law, it was okay for Meadows to use his mother’s property for his voter registration if he stayed there at least one or two nights a year. In fact, he said that under a little-known provision of state law, Meadows could have continued to use the Sapphire address for voting even after he had sold the property because he was engaged in “government service” in D.C. The law says the last address in the state “at the time of that person’s removal [from North Carolina] shall be considered and held to be the place of residence.”Advertisement

Thus, Meadows would not have needed to register to vote six months later using the address of the mobile home. The same courtesy, however, would not have been extended to his wife because she was not in government service. Voter registration records show Debra Meadows was also registered in three states at the same time.

North Carolina initially did not take action to remove Debra Meadows from the voting rolls at the same time as her husband. But state records now show her voter registration was ended by Macon County officials as well. “The Macon County Board of Elections administratively removed the N.C. voter registration of Debra Meadows under N.C.G.S. § 163-57(6) on April 21, upon receipt of documentation that shows she registered to vote and voted in Virginia during the 2021 election,” said Patrick Gannon, a spokesman for the North Carolina State Board of Elections.

Debra Meadows did not respond to a message sent to her email address at Right Women PAC, where she is executive director, or to a text message.